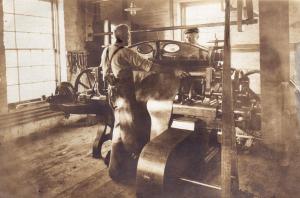 The building was located at the South Oshawa Tannery on the Oshawa Creek near Mill St., but in 1899, 6 years after Lauchland had retired, the company was forced to move to the east side of the Oshawa Creek on Whiting Ave. in Cedar Dale, as the old tannery was destroyed by fire.  It was after this fire that Robson’s two sons, Charles and Frank, joined the firm.  After the move to Cedar Dale, the business regained its pre-fire status and in 1904 became the Robson Leather Co.  At this time, new machinery was being implemented and they began to manufacture the ‘Black Beauty’ which were upper leathers for shoes.  By 1905, Robson Leather became the Robson Leather Co. Ltd. and had become one of the foremost in the tanning industry in Canada.

The Robson Company is descended from one of Oshawa’s earliest tanneries, the Bartlett Tannery.  James Robson and William Lauchland purchased the tannery in 1865 after the death of the both of the Bartlett brothers in 1862, thus beginning what is said to be the first big industry in Oshawa. 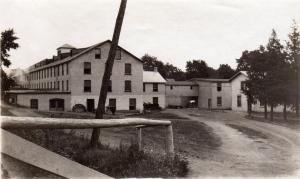 During WWI (1914-18), 70% of all upper leathers for the Canadian Expeditionary Force (CEF) were produced at Robson.   By WWII (1939-45), both Frank and Charles Robson had died and the company was being administered by Charles’ two sons Charles Jr. and Edward.  Like WWI, production for WWII was a priority.  Nearly 100% of all production went towards the war effort, with 60% of Canada Armed Forces wearing upper leathers made by Robson.   About 10,000 of these uppers were being produced daily.   During this turbulent time, Robson Leather made a great contribution to the Canadian war effort.

In 1963, Robson Leather combined forces with Kitchener, Ontario based James Lang Leather Co. Ltd. and the name changed to Robson-Lang Leathers Ltd.   The company stayed in business only 14 more years before its Oshawa doors were closed forever due to many strikes and a decline in business.   The entire Robson-Lang industry closed in 1986. Despite the great accomplishments of becoming a large industry in Oshawa, helping out tremendously during WWII, and for lasting over 100 years, the Robson Leather Co. will forever leave a mark on the city of Oshawa with the pollution damage caused by using harmful chemicals in their processing of the hides.  While it was not known at the time what the consequences would be, it unfortunately has caused damage to the environment and to the health of former employees.